‘Be an agent of Caribbean unity’ Bishop Persaud ordained for Mandeville 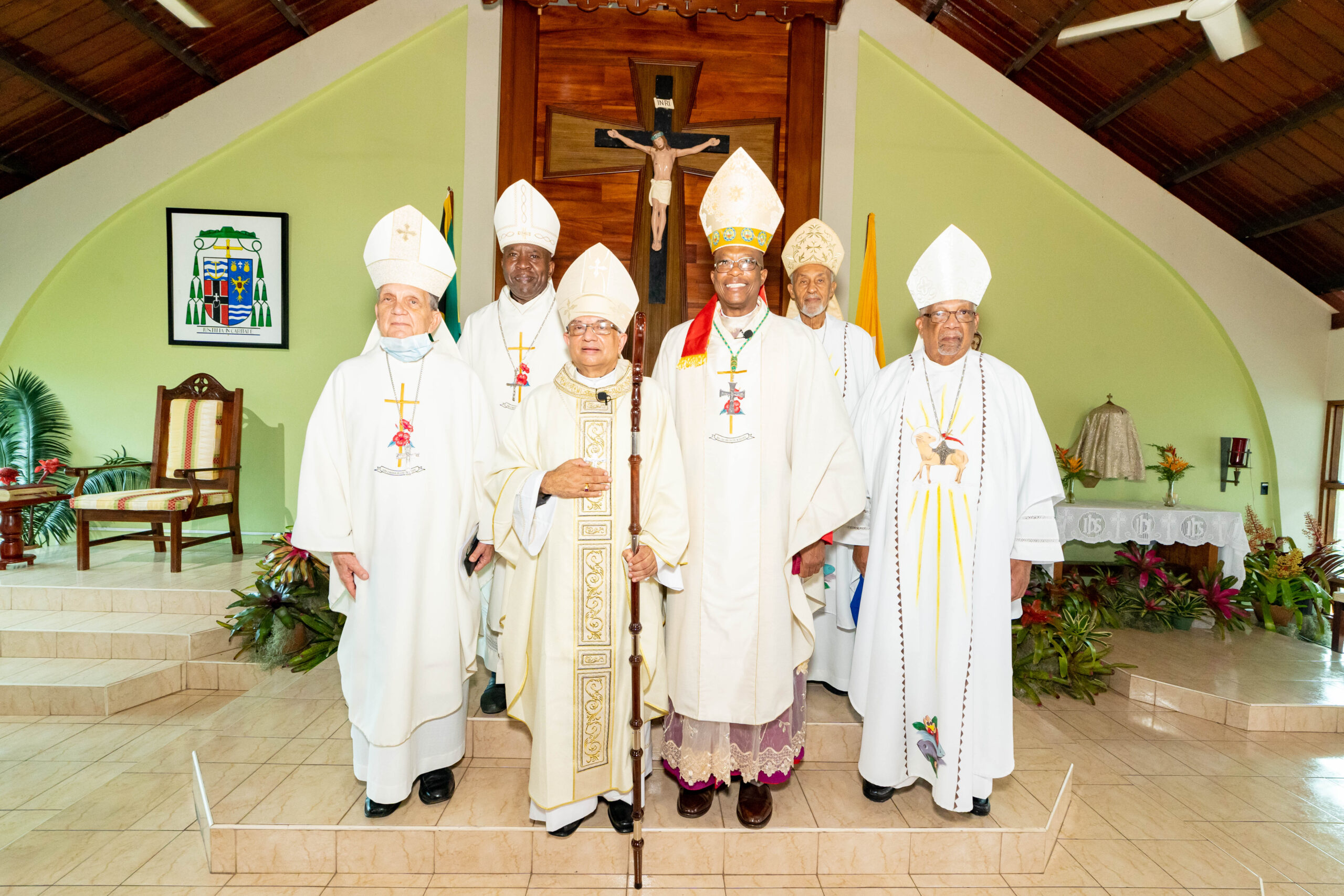 As Bishop John Persaud DD officially began his ministry as bishop of Mandeville Saturday, September 18, he expressed gratitude to the diocese for the warm welcome extended to him which he described as “phenomenal”. He told the clergy of the diocese that they will be his “closest companions” on this journey.

“I want to know you and love you as God does. I want to care for you and allow you to care for me. I want honesty and trust to mark our relationship as I can speak the truth to you even when at times it will be hard to hear…. My dream is that we can see our differences as opportunities that can open to new engagements,” the newly ordained bishop said at the end of his Mass of episcopal ordination at St Paul of the Cross Cathedral, Mandeville.

Bishop Persaud shared that whenever he is terrified of what he is to the diocese, he is given “comfort” of what he is to them. “For you I’m a bishop, but with you I am, after all, a Christian.” The former, he explained signifies the office undertaken, the latter, grace.

“The former is a name for danger, the latter a name for salvation. So, I hope that the fact that I was brought together with you gives me more pleasure than my being placed as your head,” he said.

The Church in Jamaica comprises the Archdiocese of Kingston and the dioceses of Montego Bay and Mandeville. For the ordination of a diocesan bishop, the principal consecrator, usually the metropolitan archbishop is assisted by two other bishops.

In this case Metropolitan Archbishop Kenneth Richards of Kingston was assisted by Bishop Burchell McPherson of Montego Bay and Archbishop Emeritus Charles Dufour of Kingston. Archbishop Dufour served as Apostolic Administrator of Mandeville since 2016.

In delivering the homily, Archbishop Emeritus Joseph Harris began “today we gather to witness a ceremony of utmost importance for the Church or as Pope St John Paul II would describe it, the community of disciples.”

In this ceremony the continuity of the Church is realised, Archbishop Harris asserted.

He told his “brother” John that this “portion” of the Lord’s vineyard is indeed representative of the “Little Flock”—those who take the Word of the Lord seriously, who accept the invitation to be collaborators with Christ in His mission of salvation of the world.

Archbishop Harris reminded Bishop Persaud that he is not only recognised as bishop for Mandeville but for Jamaica, the Caribbean, and the world.

“With our other Caribbean bishops, you are to be an agent of Caribbean unity both religiously, and politically,” he said.

During the ordination, two congratulatory messages were read from Apostolic Nuncio Archbishop Fortunatus Nwachukwu and Bishop Francis Alleyne OSB of Georgetown, Guyana. They were unable to attend the ceremony.

In his greetings, Archbishop Nwachukwu said that the community of the faithful in the diocese waited in “unwavering hope” for the appointment of their new shepherd following the June 19 announcement. Like the people of ancient Israel, their waiting has been like a long journey through the desert into the promised land, said the nuncio.

“I have every confidence that the Church in Jamaica will welcome you as you embrace the mission which like the sweet yoke of our Lord has been laid upon your shoulders.”

Meanwhile Bishop Alleyne bestowed well wishes to Bishop Persaud with the confidence that he is well equipped to accompany his people of the diocese. He noted that Bishop Persaud brings a wealth of experience and knowledge to his new assignment and with these, a number of special gifts and qualities that are “life giving”.
Bishop Alleyne shared that during his years as bishop in Guyana the then Fr Persaud was of immense support to him in his capacity as vicar general, judicial vicar, vicar for clergy and administrator of the Cathedral.

“But also, as an adviser, confidant and friend. He’s a man of high energy and zeal, with a passion for building the Church and living and sharing his faith with others. …I can only imagine the possibilities that can come to fruition,” Bishop Alleyne asserted.

In giving brief remarks, Archbishop Richards urged his brother priests to support their newly ordained bishop. “Be available to him. Help him to carry whatever plans are carried out,” he said.

The episcopal ordination began with the national anthem of Guyana.

Also, in attendance was Archbishop Emeritus Donald Reece of Kingston.

During the ordination rite, Fr Persaud was presented by Rev Michael Rowe, rector, St Paul’s Cathedral who was later announced Vicar General of the Diocese by Bishop Persaud at the end of the ceremony.