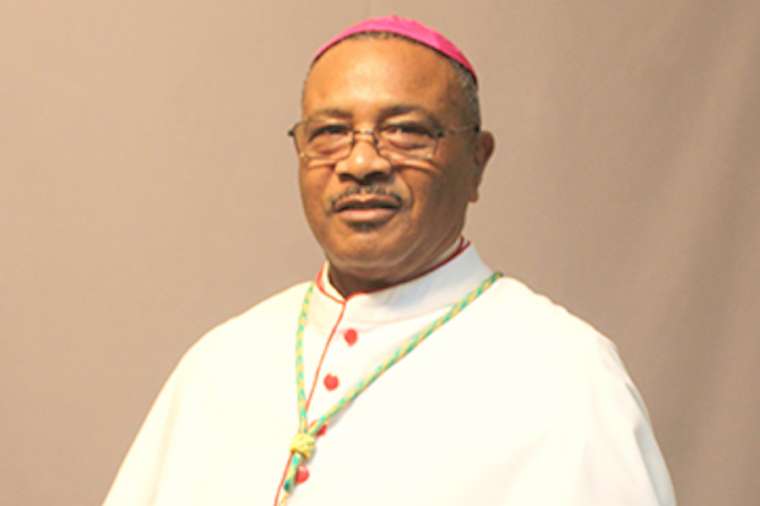 A bill purporting to secure equality and anti-discrimination in Belize was withdrawn last month, after Bishop Lawrence Nicasio and other Catholic leaders raised objections to the bill’s treatment of sexual orientation and gender identity.

Nicasio said the bill risked creating a “new colonialism” where international experts are allowed to change the country’s laws, culture and values.

“I think that it was an important battle and that if the bill had passed, it would have had dire consequences for the future of Belize,” Father John Robinson, SOLT, told CNA Oct. 13. “However, I am under no delusion that the war has been won. There is a push in education at all levels to accept the new gender theory and to normalize and promote the LGBT lifestyle.  I am sure that there will be similar proposals in the future.”

“It is important to realize that the Equal Opportunities Bill is only one part of a larger movement of social engineering that is largely promoted and funded by foreign entities,” said Robinson, who has lived in Belize since 1994 and is chairman of Belize’s Guadalupe Media.

“These groups have historically sought to bring about their agenda through education and law.”

“Тhіѕ would bе а nеw соlоnіаlіѕm,” the bishop said in a Sept. 15 letter.

Several international NGO backed the legislation, as part of a global push to change laws in British Commonwealth countries.

In January the Belize government’s press office said the Equal Opportunities Bill was needed “to address and prevent discrimination, stigma, and violence.”

The bill aimed to regulate “specific conduct in areas of public life” regarding employment, education, access to premises or accommodation, provision of goods and services, travel, public services.”

It would have also established an Equal Opportunities Commission, a non-judicial body that would “work with stakeholders to address inequality, resolve disputes, conduct research and education, and develop guidelines to assist the government, businesses and the community in identifying and eliminating systemic discrimination.”

The commission would have been funded by the National Assembly but could also seek funds from domestic, regional and international sources, provided that the funding be disclosed.

Also called for by the bill was an Equal Opportunities Tribunal, a judicial body funded only by the Belize government. An appointed judge of the Supreme Court would compose the tribunal. The tribunal has the power to make declarations, awards and judgment on cases. It would “provide for broad-ranging remedies” and resolve claims not settled before the commission.

Bishop Nicasio, whose diocese encompasses the entire country of 383,000 people, voiced his desire “to end unjust discrimination and all injustice” and pledged cooperation to work towards these ends, but he said the Catholic Church could not support the bill for several reasons.

The bill could infringe on parents’ rights, and, given the power of law to form consciences and opinions, the bill would “do much to confuse the youth of Belize regarding the sacredness of sexuality.” Sexuality is “a way toward holy matrimonial union and the conception of children,” he said.

The view of human nature behind the bill also drew criticism from the bishop, who said “the novelty of the anthropology” in it was another reason not to support it. The bill recognizes “intersex” as a sex in addition to male and female.

“The bill introduces the notion that humanity has three sexes instead of two, the notion that subjective gender identity is more important than one’s God-given biological sex and would impose on Belizeans the task of ‘gender mainstreaming’.”

It would give “unparalleled power” to an Equal Opportunities Commission and an Equal Opportunities Tribunal. In the name of fighting discrimination, it could endanger freedom of conscience and religion. While the bill made some exceptions for religious organizations, there were none for “individual believers with deeply-held, Bible-formed beliefs.” He warned the bill could create a “pendulum effect” and enable discrimination against these individuals.

For Fr. Robinson, the bill itself was “not a surprise.” He saw it as “only one manifestation of an ongoing social engineering experiment.”

“However, the extreme nature of the proposals was surprising, especially the creation of an entirely independent judicial branch with the rank of a supreme court and the power invested in the Commission/Tribunal with no real checks or balances.”

After the bill failed to advance, Belize Prime Minister Dean Barrow told reporters Sept. 16 that the cabinet was “very upset” not to proceed with it and felt it was a good, necessary, and “overdue” bill, PlusTV Belize reported. He said the Belize constitution provides equal opportunity and the bill would have provided an “umbrella of protection”.

He claimed it was a misconception that the legislation would be “rushed” since there would be time for views to be voiced in committee. Barrow insisted that there had been “widespread” consultations.

The Anglican Bishop of Belize, Phillip Wright, in his role heading the Belize Council of Churches, had told the prime minister the council could not support the bill as it was written. The Roman Catholic Church in Belize is also a member of the council.

Backers of the bill were planning to proceed in the face of expected opposition from evangelical Christians, but opposition from other churches was too much, according to Barrow.

“We’re not going to go against all the churches, the evangelicals plus the Belize Council of Churches,” said the prime minister. According to Barrow, Wright seemed to suggest that further work could have resulted in an agreement.

The U.K.-based Human Dignity Trust, an LGBT advocacy group, aided with the drafting of the Belize bill. In an April 17 announcement, the trust said the Belize bill was “the first of their kind for the Caribbean region.” The trust “supported the process of public consultations on the proposed legislation” and translated the legal documents into “digestible explanatory materials for everyday Belizeans.”

The trust is a member of the Equality and Justice Alliance, a consortium of three NGOs which received about $7.25 million from the U.K. Foreign & Commonwealth Office in 2018 for a two-year program. This program aimed to engage Commonwealth leaders, governments and civil society leaders “to advance equality and equal protection before the law in order to secure the rights of all Commonwealth citizens, regardless of gender, sex, sexual orientation, or gender identity and expression.”

Besides the U.K. Foreign & Commonwealth Office and others, the trust is presently funded by the Canadian government’s diplomatic department Global Affairs Canada; the Tides Foundation’s Equality Without Borders Fund; the Open Society Foundations; and the Sigrid Rausing Trust, among others.

The Human Dignity Trust worked with the Belize National AIDS Commission and Office of the Special Envoy for Women and Children “in order to create an enabling environment for the introduction of this progressive legislation.”

Its specific efforts included a “public education campaign” on television, radio, a website and social media. Its public service announcements were “designed to break down stigma and encourage respect and tolerance for LGBT people, women and girls and people with disability,” the trust said.

While critics of Belize’s bill see it as a form of ideological colonialism, some backers of this international effort claim they were making amends for the colonial legacy of the British Empire. Then-Prime Minister Theresa May spoke to the Joint Forums of the Commonwealth Heads of Government Meeting in 2018, voicing “deep regret” that Britain had instituted “discriminatory laws,” including the criminalization of same-sex sexual relations, in its Commonwealth territories.

“It has been a great honor to be entrusted by the British government to provide technical support for law reform that has the power to transform millions of people’s lives across the Commonwealth,” Téa Braun, director of the Human Dignity Trust, said in April 2020. “We have been overwhelmed by the commitment of government officials in Belize, Mauritius and St Vincent and the Grenadines to rid their law books of discriminatory laws and enact protective legislation, and assisting them has been a privilege.”

The group said the proposed human rights commission’s ability to investigate someone without a formal complaint would allow “special interest activism in targeting organizations, schools or businesses.” The bill’s definition of “gender identity” has never appeared in Belize law before and would be that of LGBT activists. “Intersex” would also be a term new to Belize law.

The evangelical critics objected that similar anti-discrimination laws have been used in other countries to “arrest pastors, silence those who speak up about their values, sue cake bakers for not doing same sex wedding cakes.” The bill’s religious freedom protections are “severely deficient.”

Because the law aimed to protect “lawful sexual activity” from “discrimination,” a school that fired a teacher for sexual relations with a student age 16 or over would have faced a discrimination complaint if the bill had become law.

The critics also faulted the law’s ambiguity in banning “unintended,” “undirect,” “unaware,” and “partial” discrimination. The tribunal system established an “alternate independent judicial path” that undermines protections like presumption of innocence and provision of legal representation, they sad.

“I am very grateful to those who vigorously opposed this bill and who sounded the alarm,” the priest said. “I found it very concerning that many Catholics were oblivious to the harm that this bill would have done to Belize and (that there) was reluctance in the Church to take action.  I am grateful especially to the Evangelical churches who were largely responsible for opposing and helping to defeat this bill.”

Another point of controversy in the country is the Ministry of Education’s “Belizean Studies” program in non-denominational secondary schools.

“This program has been rejected by the denominational schools because of its relativism, its subtle Marxism and its gender theory which promotes an anthropology that is in direct conflict with a Christian anthropology,” Robinson said.

In 2012 controversy focused on a Health and Family Life Education manual promoted by the U.S. Peace Corps through the Ministry of Education. Before its distribution through all primary schools in Belize, evangelical and Catholic critics objected to what Robinson characterized as “highly inappropriate sexual content” and its promotion of “sexual indulgence.” Objections from critics halted the program.

The United Nations is another area where Belizean leaders are encouraged to advance LGBT causes like the equal opportunity bill.

LGBT issues in Belize were a topic at a Nov. 12, 2018 review of Belize’s human rights record conducted by a working group of the United Nations Human Rights Commission. At that meeting several countries pressed Belize to pass anti-discrimination laws on the basis of sexual orientation and gender identity, and some sought the legalization of abortion.

The Belize delegation said some recommendations were aligned with the government’s priorities. The delegation also voiced support for sex education and HIV prevention programs developed by UNESCO.