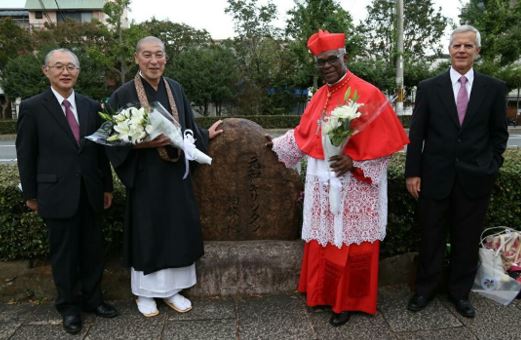 Cardinal Kelvin Felix paid tribute to the memory of the first Catholic martyrs in Japan on October 7, 2019.

He had been invited by the Interreligious Association for Peace and Development (IAPD), and the Universal Peace Federation (UPF) founded by Rev and Mrs Sun Myung Moon, to attend a two-day (October 5 and 6) International Conference at the Hotel Nagoya Castle, Nagoya.

Political, religious, civil society, media and academic leaders and representatives from Korea, the US, Taiwan and other countries around the world gathered for the conference, whose theme was Pacific Civilization Era – Peace in East Asia and Prospects for Japan-Korea-US Cooperation (upf.org).

After the conference, the IAPD invited Cardinal Felix to visit the historical city of Kyoto.

The first Catholic missionaries arrived in Kyoto around 1540 from Portugal and Spain. In 1549, under the leadership of St Francis Xavier, the mission increased rapidly and many Japanese became Catholic.

At the beginning, the imperial government welcomed the missionaries and they expanded well in Kyoto (former capital city of Japan) and Nagasaki. But soon the government began to grow wary of foreign influence and feared becoming colonised as happened in the Philippines and China.

The government and the Buddhist authorities started to persecute and oppress the Catholics. In 1597, 26 Catholics were executed in Kyoto and became the first martyrs of Japan. They were  canonised on June 8, 1862 by Pope Pius IX, and are listed on the calendar as Sts Paul Miki and his Companions, commemorated on February 6.

On October 1619, 52 Catholics were publicly burnt to death in Kyoto on the banks of the Kamogawa River.

Exactly 400 years later, almost to the day on October 7, Cardinal Felix, the venerable Buddhist monk, Higashi, and a group of local Christians held a special moving prayer service of healing and reconciliation at this exact spot.

Venerable Higashi was so deeply moved that he offered spontaneous prayers of reparation for the suffering inflicted on Catholics by the Buddhist authorities of that time. He prayed with a sincere and repentant heart to comfort the souls of the Catholic martyrs.

Cardinal Felix, similarly, offered prayers of reparation and reconciliation for the martyrs. Then, while the assembly was singing, Cardinal Felix, Venerable Higashi and Rev Nozaki of the Family Federation for World Peace, held hands and silently prayed for the souls of the martyrs.

It was a beautiful and very moving moment of healing of the sufferings of the past and a moment of reconciliation between Catholics, Buddhists and Protestants.

This gave rise to a joyful spirit of hope that religious leaders can work together beyond their differences to face and solve the problems and the sufferings of our present world.

It was very significant that one month before the visit of Pope Francis to Hiroshima and Nagasaki (Nov 23–26), Cardinal Felix prayed at the site where the martyrs and saints of Kyoto gave their lives for the faith.