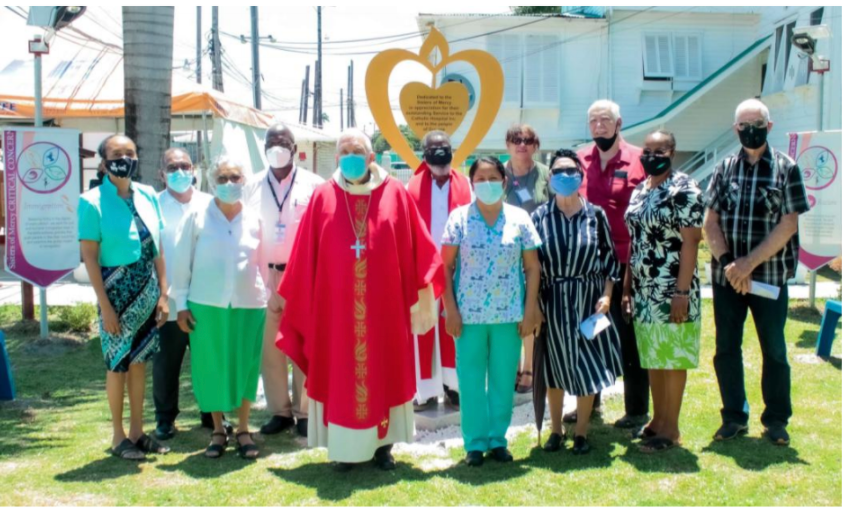 Sisters of Mercy recognised for their role

The St Joseph Mercy Hospital (SJMH) held a special dedication ceremony and Mass on September 21 to commemorate the hospital’s 75th anniversary and recognise the Religious Sisters of Mercy (RSM) for their phenomenal contribution to the hospital.

This year marks the 125th anniversary of the foundation of the Sisters of Mercy congregation in Guyana, and one of the Sisters’ most remarkable and valued achievements has been the establishment of SJMH, which flourished under their caring and prudent guidance, according to diocesan weekly Catholic Standard.

The Mass was celebrated by Bishop Francis Alleyne OSB of Georgetown, who was assisted by Msgr Terrence Montrose.

On the achievement of SJMH’s 75th anniversary, Head of the Sisters of Mercy in Guyana, Sr Julie Matthews RSM congratulated the Board, management and staff for continuing to provide excellent health care services in Guyana, reinforcing the hospital’s reputation as a premier medical institution.

“Mercy’s presence continues in times when they are good, but most of all in times when there is trouble and in areas where people fear death,” she said, noting that the RSM have helped in fights against cholera, HIV/AIDS and continue to play its part in tackling the COVID-19 pandemic.

Sr Julie noted that the SJMH’s COVID-19 health facility was a collaborative project between Bishop Alleyne and the RSM. In particular, she commended the SJMH Board, the Bishop, and her lay colleagues for their longstanding and commendable support for the work of the RSM in Guyana.

He noted that during its 75 years of exemplary service to the nation, the SJMH progressively expanded and improved the range, quality, and delivery of medical services.

“Foremost among these are excellent maternity/delivery care, modern orthopedic procedures such as total hip and knee surgeries, brain surgery, kidney transplants, laparoscopic procedures, and upper and lower endoscopies,” he said.

He added that the Resident Care Centre was opened in 2016 and is now home to 35 elderly persons. The property for the centre was donated by the RSM.

Also giving remarks, Deputy Chief Executive Officer of the SJMH, Deborrah Ramsay gave a history of the presence of the Sisters of Mercy, noting that they came to Guyana in 1895 and gave their service to Hansen’s Disease patients, schools in Georgetown, other regions, and also orphanages.

She said that there was great joy when the RSM was granted permission to manage the hospital, which was incorporated on September 20, 1944.

According to the Catholic Standard report, the high point of the dedication ceremony was the unveiling of a commemorative monument, which was prominently positioned in the newly established ‘Serenity Gardens’ at SJMH.

The monument was designed by Bernard Ramsay and features a double heart with a burning flame at its apex.

Catholic Standard explained that the outer heart is symbolic of the selfless service given by the Sisters of Mercy to SJMH from its inception.

“The inner heart represents the deeper spiritual and unconditional love and dedication with which they served the hospital and the Guyanese community in general,” the diocesan weekly said.

It continued that the burning flame is a symbol of eternal commitment that continues to inspire the dedicated service of the SJMH. The heart is mounted on a solid case, granite-clad base with its four sides pointed together, pointing in an upward direction in honour of the Sisters of Mercy along with those who must never be forgotten for their fine service, strength, wisdom, and vision which they have given to this iconic institution over many years. The location of the monument is deliberately placed at the eastern end of the serenity garden to mark the position of the rising sun which gives hope and enlightenment for each new day.