Voices of excluded heard in Document for Continental Phase of Synod 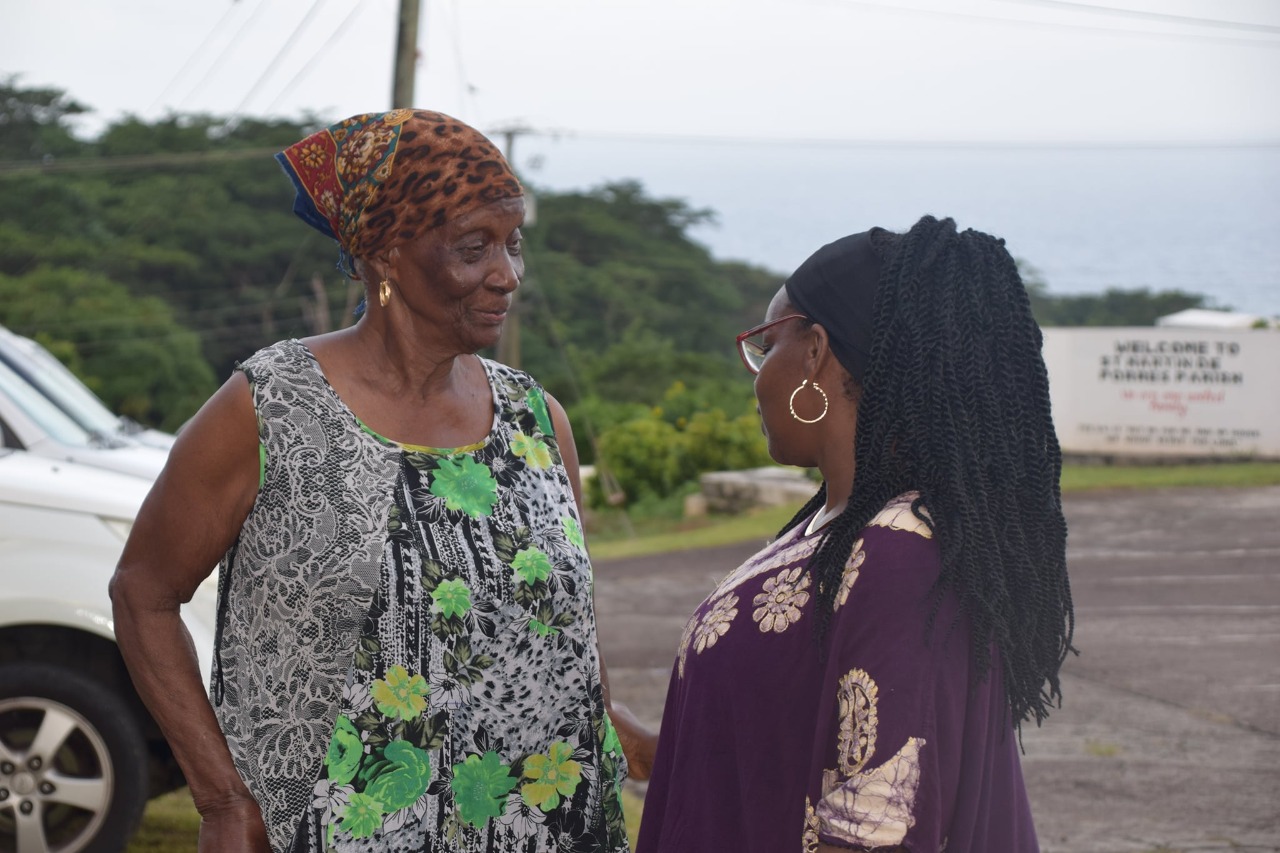 The Synod of Bishops publishes the text that will provide a “frame of reference” and form the basis for the work of the second stage of the synodal path launched by Pope Francis in 2021. The Working Document for the Continental Stage was based on the syntheses coming from the churches of the five continents after consultation with the faithful and others.

Here are the poor and the indigenous, families, remarried divorcees and single parents, LGBTQ people, and women who feel excluded. Here are the victims of abuse or trafficking or racism. Here are priests, laicized priests, and lay people; Christians and those ‘distant’ from the Church, those who want reforms on priesthood and the role of women, and those who “following the liturgical developments of the Second Vatican Council, do not feel at ease.” Here are those who live in countries of martyrdom, those who deal daily with violence and conflict, those who fight against witchcraft and tribalism. In short, here within the approximately 45 pages that make up the Document for the Continental Stage (DCS) is the whole of humanity, with its wounds and fears, its imperfections and demands.

The syntheses of the Churches of the world

This is the Document that will serve as the basis of the work for the second stage of the synodal path launched by Pope Francis in October 2021, with the consultation of the People of God. Precisely during this first stage, the faithful — and not only the faithful — of every diocese in every corner of the globe were involved in a process of “listening and discernment”. And the results of meetings, convocations, dialogues, and innovative initiatives — above all, that of the digital Synods — have flowed into syntheses or summaries that were sent to the General Secretariat of the Synod, and have now all been collected in a single document: the “Document for the continental stage.”

A ‘frame of reference’

Developed simultaneously in two languages (Italian and English), the Dicastery explains that the text “intends to allow dialogue between local Churches and between the local Church and the Universal Church.” So, it is not a summary nor a magisterial document, nor a mere report of local experiences, much less a sociological analysis or a roadmap with goals or objectives to be achieved: “It is a working document that seeks to bring out the voices of the People of God, with their insights, their questions, their disagreements.” The experts who met between the end of September and the beginning of October in Frascati to draft the text speak of a “frame of reference” for the local Churches and the Bishops’ Conferences in view of the third and final stage, the universal stage, with the Assembly of Bishops to be held in Rome in October 2023 and again in 2024, as recently announced by the Pope.

‘No one is excluded’

In particular, the Document notes “a series of tensions” that the synodal path has brought out: “We should not be afraid of them, but articulate them in a process of constant communal discernment, so as to harness them as a source of energy without them becoming destructive” (DCS, 71). The first is “listening as openness to welcome” starting from “a desire for radical inclusion.” “No one is excluded” is, in fact, one of the key concepts of the text.

Indeed, the summaries show that many communities have understood synodality as “ an invitation to listen to those who feel exiled from the Church.” There are many who feel “denigrated, neglected, misunderstood,” first and foremost “women and young people who do not feel that their gifts and abilities are recognized.” Being seriously listened to was therefore a “transformative” experience.

Among those who ask for a more incisive dialogue and a more welcoming space are, for example, priests who left the ministry to get married, but especially those who “for various reasons, feel a tension between belonging to the Church and their own loving relationships,” such as “remarried divorcees, single parents, people living in a polygamous marriage, [and] LGBTQ people.” “ People ask that the Church be a refuge for the wounded and broken, not an institution for the perfect,” reads a contribution from the US; while from Lesotho comes the call for discernment on the part of the universal Church: “There is a new phenomenon in the Church that is absolutely new in Lesotho: same-sex relationships. […] This novelty is disturbing for Catholics and for those who consider it a sin. Surprisingly, there are Catholics in Lesotho who have started practicing this behaviour and expect the Church to accept them and their way of behaving. […] This is a problematic challenge for the Church because these people feel excluded.”

Points in common and divergences

In spite of cultural differences, substantial similarities can be seen across continents with regard to those perceived as “excluded” in society and in the Christian community. On the other hand, there is a pluralism of positions even within the same continent or country. “Issues such as the Church’s teaching on abortion, contraception, ordination of women, married clergy, celibacy, divorce and remarriage, Holy Communion, homosexuality, LGBTQIA+ were raised up across the Dioceses both rural and urban. There were, of course, differing views on these and it is not possible to give a definitive community stance on any of these issues,” they say from South Africa.

The voice of the poor

Numerous syntheses express regret and concern that the Church has not been able, always and everywhere, “to effectively reach out to the poor on the peripheries and in the most remote places” — the poor, understood not only as the destitute, but also the lonely elderly, indigenous people, migrants, street children, alcoholics and drug addicts, victims of trafficking, survivors of abuse, prisoners, groups who suffer discrimination and violence because of race, ethnicity, gender, sexuality. Their voices appear most often because they are reported by others. And when they appear in summaries, these faces and names call for “solidarity, dialogue, accompaniment and welcome.”

Many local churches report that they are facing a cultural context marked by a decline in credibility and trust due to the clergy abuse crisis. “This is an open wound that continues to inflict pain on victims and survivors, on their families, and on their communities,” reads the Document, which cites a contribution from Australia stating, “There was a strong urgency to acknowledge the horror and damage, and to strengthen efforts to safeguard the vulnerable, repair damage to the moral authority of the Church and rebuild trust.” The Document continues, “Careful and painful reflection on the legacy of abuse has led many synod groups to call for a cultural change in the Church with a view to greater transparency, accountability, and co-responsibility.”

Participation and recognition of women

“The call for a conversion of the Church’s culture … is linked in concrete terms to the possibility of establishing a new culture, with new practices and structures and attitudes.” This concerns, first of all, the role of women and their vocation “to participate fully in the life of the Church.” It is a critical point that is present, in different forms, in all cultural contexts, and concerns the participation and recognition of laywomen and women religious. In fact, “From all continents comes an appeal for Catholic women to be valued first and foremost as baptized and equal members of the People of God.”

“There is almost unanimous affirmation” that many women “feel sadness because their lives are often not well understood, and their contributions and charisms not always valued.” The Holy Land’s summary is indicative in this regard: “In a Church where almost all decision-makers are men, there are few spaces where women can make their voices heard. Yet they are the backbone of Church communities, both because they represent the majority of the practicing members and because they are among the most active members of the Church.”

Therefore, the Document states, “the Church faces two related challenges: women remain the majority of those who attend liturgy and participate in activities, men a minority; yet most decision-making and governance roles are held by men. It is clear that the Church must find ways to attract men to a more active membership in the Church and to enable women to participate more fully at all levels of Church life.”

Discrimination of people with disabilities

People with disabilities also speak of a lack of participation and recognition: “The forms of discrimination listed – the lack of listening, the violation of the right to choose where and with whom to live, the denial of the sacraments, the accusation of witchcraft, abuse – and others, describe the culture of rejection towards persons with disabilities,” says a report from the Dicastery for Laity, Family and Life. “They do not arise by chance, but have in common the same root: the idea that the lives of persons with disabilities are worth less than others.”

The testimonies of persecution and martyrdom

Also prominent in the Document is the witness of faith lived to the point of martyrdom in some countries, where Christians, especially young people, “face the challenge of systematic forced conversion to other religions.”

“There are many reports that emphasize the insecurity and violence with which persecuted Christian minorities must contend.” There is talk of fanaticism, massacres or even, as the Maronite Church affirms, forms of “Sectarian and ethnic incitements” degenerating into armed and political conflicts, which make the lives of so many faithful around the world particularly painful. Even in these “situations of fragility” however, “Christian communities have been able to take up the invitation addressed to them to build experiences of synodality, to reflect on what it means to walk together.”

“Equally prominent is the commitment of the People of God to the defence of fragile and threatened life at all its stages,” the Document says. It gives the example of the Ukrainian Greek Catholic Church, for which “paying special attention to women who decide to have an abortion due to fear of material poverty and rejection by their families in Ukraine; to carry out educational work among women who are called upon to make a responsible choice when going through a difficult time in their lives, with the aim of preserving and protecting the lives of unborn children and preventing abortion; to care for women with post-abortion syndrome,” is a part of synodality.