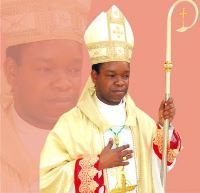 The Holy Father, Pope Francis, has appointed His Excellency Most Rev. Fortunatus Nwachukwu, Titular Archbishop of Acquaviva, presently Apostolic Nuncio in Nicaragua, as the new Apostolic Nuncio of the Antilles Episcopal Conference.

Archbishop Fortunatus Nwachukwu was ordained a priest on the 17th June, 1984, with incardination in the Diocese of Aba (Nigeria). He possesses a Doctorate in Dogmatic Theology and a Doctorate in Canon Law.

He served in the Apostolic Nunciatures – Holy See Embassies in Ghana, Paraguay, Algeria, at the UN Offices and Specialized Institutions in Geneva, and at the Secretariat of State at the Vatican – Section of Relation with States.

Between 2007 and 2012 he was the Chief of Protocol of the Secretariat of State (Vatican). His first assignment as Head of Mission was on 12th November, 2012 as Apostolic Nuncio (Holy See Ambassador) in Nicaragua.

Given at the Office of the AEC Secretariat, Port of Spain, Trinidad on this 4th day of November, 2017.