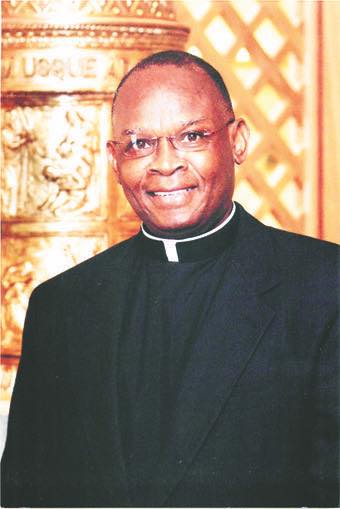 We join with the Archdiocese of Nassau in mourning the death of Msgr..PRESTON MOSSwho went to his eternal reward on Monday March 11th 2019.  Msgr. Preston was one of the first diocesan priests of the new diocese of Nassau and became an icon of diocesan priesthood for those of us who chose that life path in the heady years of the 1970s.  I was a student at the Seminary of St. John Vianney and the Uganda Martyrs in  Trinidad and Tobago when the first Bahamian seminarians came to study there as part of a plan to develop priests with a strong sense of service to the Caribbean people in a local Caribbean Church.  Msgr. Alfred Culmer was the first such student.

Preston Moss came to visit seminarian Culmer and took the seminary by storm.  He was a gentle soul with a liturgical style and personal flair which we had never experienced before.  He opened up for us the possibility of liturgy as drama and communication, finding its greatest effectiveness in our capacity to let God’s Word and Sacrament take flesh in us.  He left us in awe of himself and drawn in excited faith to the arms and feet of our God. He became a legend for my generation. We loved him and he loved us.
Years later as a young priest, I went to the Bahamas on a preaching mission, my second visit.  I was going through a major spiritual crisis and was Preston’s guest in Nassau before going on to Freeport.  Preston came to my room the second morning and handed me a book saying, “Someone sent me this book. You can have it because I won’t have time to read it for a while.”  That book was Anthony deMello’s Awareness.  It was just what I needed at that time to draw me beyond my self absorption into the deeper, challenging quest for incarnate freedom.

We shared deeply in the months which followed and he was always a source of great encouragement in the unfolding of my priestly vocation. May he live in God’s peace. May the seeds he sowed flourish abundantly for the Church in the Bahamas and the Antilles.