Ears of our hearts 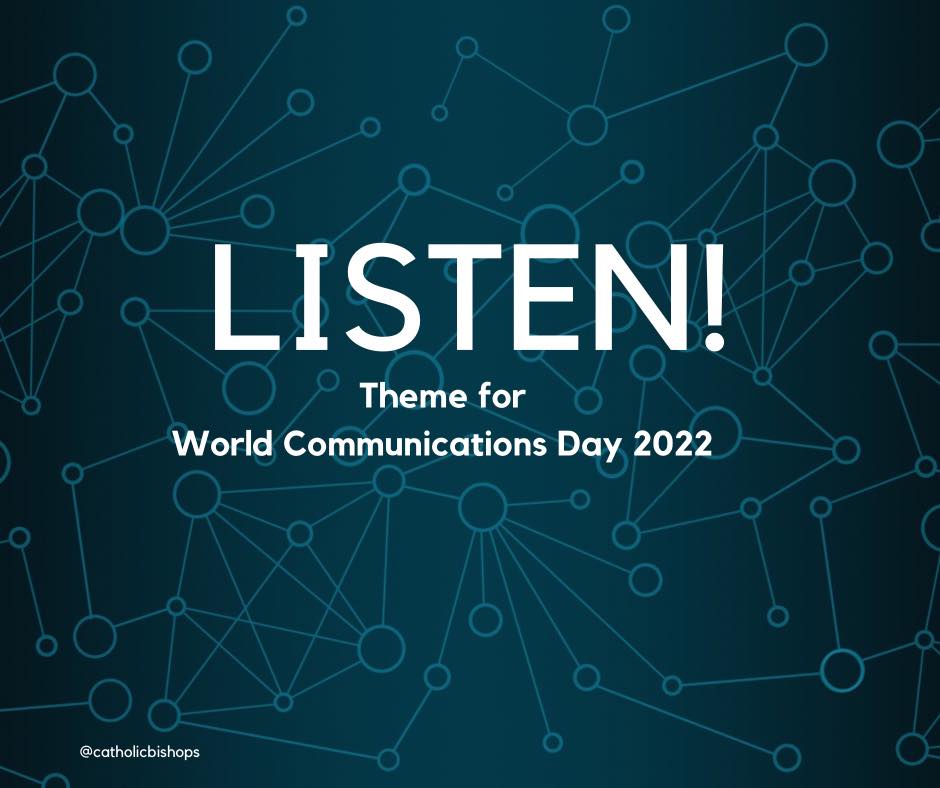 This Sunday, 29th May, 2022,  the Church observes the annual World Day of Social Communications.

Earlier this month, May 6, this paper celebrated its 130th anniversary of publication. We hope to continue fulfilling our mandate of being the voice of the Catholic Church in Trinidad and Tobago for many more years to come.
It is good that most Caribbean dioceses have a presence in the media, be it print, social or electronic. The bishops of the Antilles Episcopal Conference recognise the importance of communications, supporting over the years not only the annual Caribbean School for Catholic Communications (CSCC) but the more recent Communication for the Antilles Specialist Training (CAST), now into its second cohort.

It is through projects like these, the Church continues to communicate the Gospel values and the challenging message of Jesus Christ to the peoples of the Caribbean.The theme on this 56th occasion of World Communications Day is Listen with the ear of the heart. In his message issued on January 24, Feast Day of St Francis de Sales, patron saint of authors and journalists, Pope Francis highlights the importance of listening, lamenting “we are losing the ability to listen to those in front of us, both in the normal course of everyday relationships and when debating the most important issues of civil life”.

He says “Listening corresponds to the humble style of God” and “God always reveals himself by communicating freely; and on the other hand, man and woman are asked to tune in, to be willing to listen. The Lord explicitly calls the human person to a covenant of love, so that they can fully become what they are: the image and likeness of God in his capacity to listen, to welcome, to give space to others. Fundamentally, listening is a dimension of love. This is why Jesus calls his disciples to evaluate the quality of their listening.”

The Church recently engaged in the action of listening to the voices of not only those inside but outside its walls during the synodal journey. But this active listening cannot end with this segment of the Synod process.As Christ’s disciples, we must constantly ask ourselves if we are truly listening, especially to the vulnerable voices. We seem as a society not to be, based on the outcome of two reports which span almost quarter century between them.

The talking point for much of the last few weeks, as highlighted by the mainstream media, has been about the revelations from these reports on the operations at our nation’s children’s homes and institutions.

The more recent December 2021 report by an investigation team led by Justice Judith Jones focused on child abuse at children’s homes. Matters raised therein unwittingly raised the depressing spectre of the July 1997 report by another investigation team led by victimologist Robert Sabga. Both reports created a maelstrom of emotion in a society that often prides itself as caring for perhaps the most vulnerable, our children. Coupled with the untimely death of a two year old and the murder of an 11-year-old in a case of domestic violence, has forced us as a people to take another hard, long look at ourselves in the mirror and question what has happened to the soul and psyche of our people and why we seem to be failing our young.

Pope Francis warns in his message that while everyone has ears, “many times even those with perfect hearing are unable to hear another person. In fact, there is an interior deafness worse than the physical one. Indeed, listening concerns the whole person, not just the sense of hearing. The true seat of listening is the heart….Listening is therefore the first indispensable ingredient of dialogue and good communication.”
In our Church and wider society we are being called to listen deeply with our hearts, or else, as the colloquial saying goes, those who do not listen will feel.