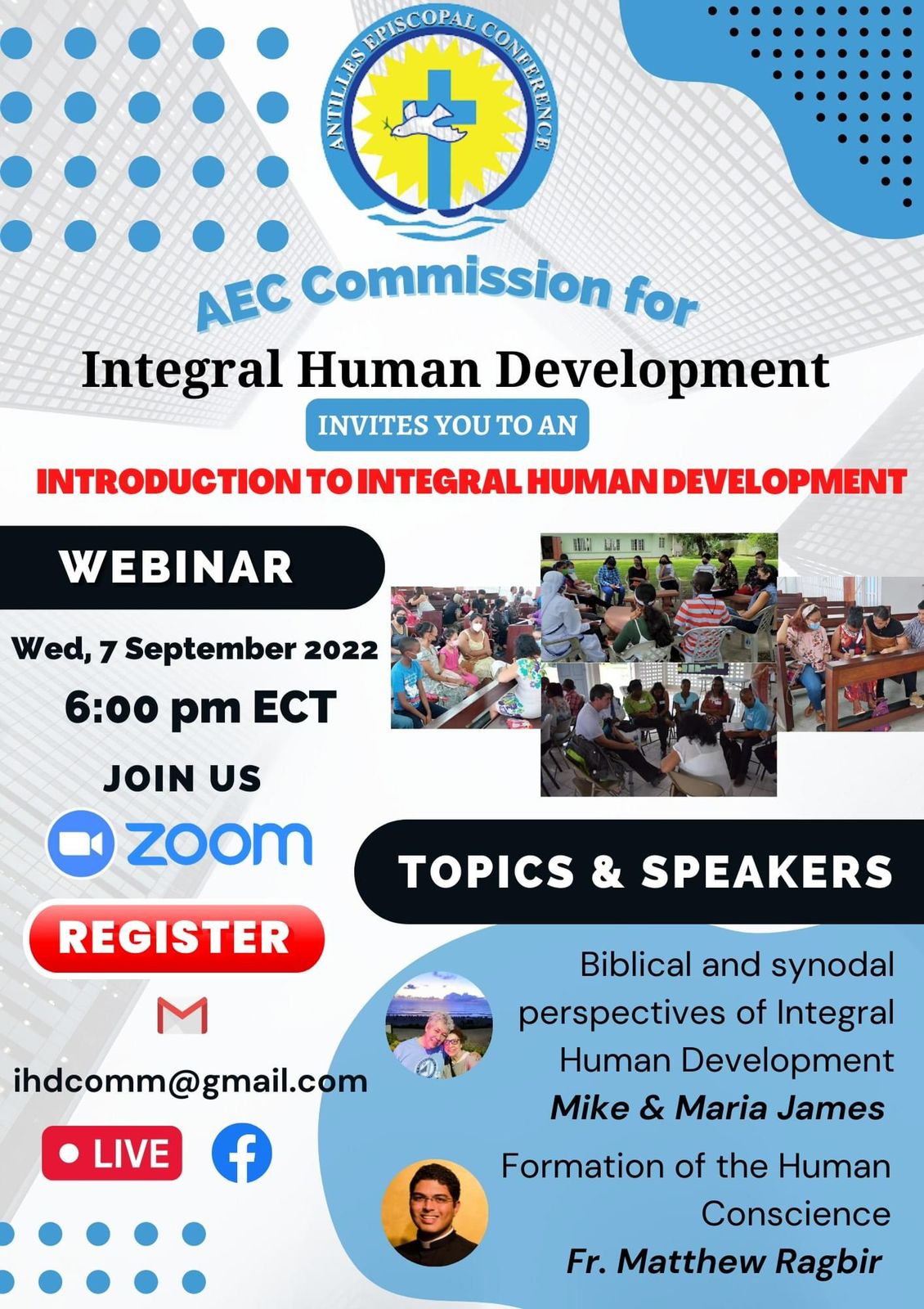 The AEC Commission for Integral Human Development is hosting a Webinar on Wednesday 7th September 2022.

Some may be prompted to ask: what is Integral Human Development?  What is the role of the Commission?

In the Curia, the core administration of the Vatican, there are a number of departments set up to oversee specific areas of administration of the Church and each one is referred to as a Dicastery.  For example there is a Dicastery that oversees the doctrine and faith of the church, there is one that focuses on the mission of the Church, another guides the Church on liturgy and worship and there are a number of others.  In each conference of bishops, in our case the Antilles Episcopal Conference (AEC), Commissions are set up corresponding to various Dicastaries of the the Roman Curia. In the AEC there are Commissions, for Liturgy, Family and Life, Doctrine, Evangelization to name a few.  One such Commission is for Integral Human Development.

In a “Motu Proprio” (a formal pronouncement of the the Pope) of 17th August 2017, Pope Francis established the Dicastery for Integral Human Development.  In that document Pope Francis stated:

In all her being and actions, the Church is called to promote the integral development of the human person in the light of the Gospel. This development takes place by attending to the inestimable goods of justice, peace and the care of creation….. This Dicastery will be competent particularly in issues regarding migrants, those in need, the sick the excluded and marginalized, the imprisoned and the unemployed, as well as victims of armed conflict, natural disasters and all forms of slavery and torture.

The concept of Integral Human Development can be traced back to Pope Paul VI in his Encyclical (official letter of the Pope to Bishops of the Church) “Populorum Progressio” (Progress of peoples).  Pope Benedict XVI and Pope Francis in particular in subsequent encyclicals have further articulated for us the understanding of Human Development and what constitutes its being Integral.  The Popes speak of the blossoming of each human person given their gifts, potential, opportunities and possibilities, it is about each person becoming the best expression of themselves.  That it becomes integral is about the development that happens because of our communion with others, in family, with the wider community and at the national, regional and global platforms of life.  Most of all it happens because of our deep communion with the divine, with our creator in Jesus Christ and moved by the Spirit.  It is the Gospel call to have life and have it abundantly, have it to the full.  Or in the words of St. Irenaeus “the glory of God is in the person fully alive, but the life of every person is the vision of God”.

The AEC Commission for Integral Human Development will be reaching out to the Dioceses in the region with a series of Webinars in an effort to reflect with the faithful of the region on the evidence of God’s glory alive among his people of the Antilles and on ways to develop and further enhance that glory.  Our reflections would also address the elements in our region that threaten the life and development of God’s people, to name those elements and articulate the steps necessary to reduce and eliminate those threats.

The first of the webinars will be on Wednesday 7th September 2022 at 18:00 hrs when the Commission will reflect on the formation of the human conscience and the biblical and synodal perspectives of Integral Human Development.  This Webinar will be open to all but is especially addressing itself to those already engaged in social outreach and members of Diocesan Commissions for Integral Human Development.  Save the date, look for the link and join us in this first crucial conversation.