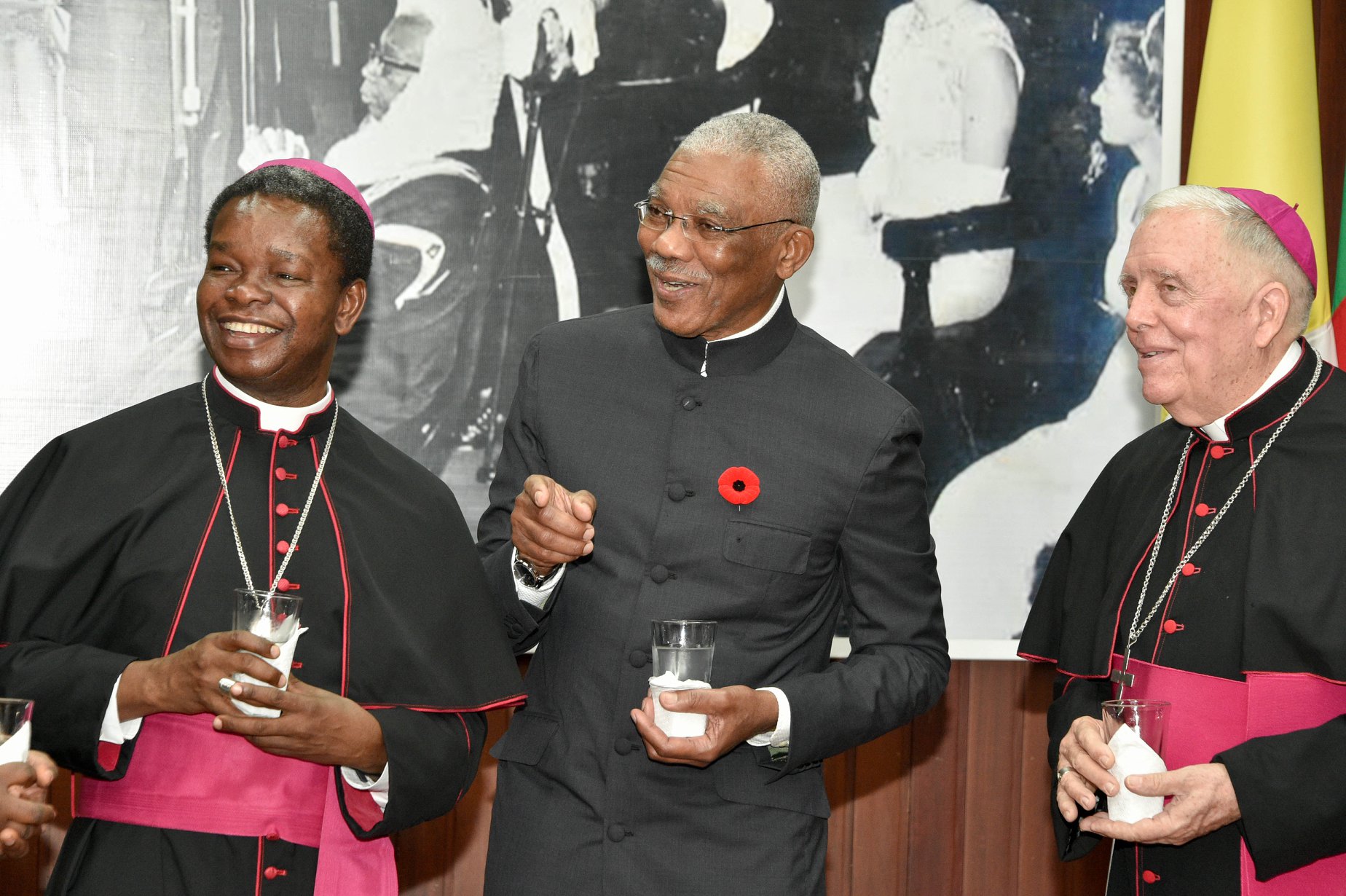 The Vatican’s new envoy to Guyana, His Excellency Archbishop Fortunatus Nwachukwu, presented his Letter of Credence to His Excellency President David Granger on Wednesday morning in the Office of the President, in the presence of Minister of Foreign Affairs, Hon. Dr. Karen Cummings; His Lordship Bishop Francis Alleyne OSB; the Archbishop’s deputy, Father Luciano Labanca; and senior government officials. In his remarks, the Archbishop conveyed to the government and the entire people of Guyana the warm greetings of Pope Francis, as well as his heartfelt wishes for their wellbeing and happiness and for peace and prosperity. He noted that the Vatican – the Holy See – and Guyana enjoy very cordial diplomatic relations and it was their wish and prayers that these relations will keep growing to the benefit of our peoples and institutions and of humanity. “I personally, will endeavor to seize every opportunity open to me to work towards strengthening these ties”, he added.

The new diplomat from the seat of the Roman Catholic Church also pointed out that Pope Francis has been persistent in his call to reach out to the more vulnerable members of our society and world and has insistently invited all to do more to protect our world from avoidable disasters. He added that one main concern of the Vatican is to serve the people regardless of their religious affiliation promoting solidarity and supporting especially the poor, the voiceless and those who are in need.

“To do this in Guyana, … the Holy See prioritizes education since we firmly believe that the future of this nation will benefit a lot if the young generations are formed in the spirit of mutual respect and the promotion of human rights as well as other values upon which Guyana is founded,” the Archbishop said adding that, “Our Catholic institutions intend always to work in partnership with the government for the benefit of all. In conclusion, the Nuncio reiterated his desire to do his best to promote the greater good of the people of Guyana and to strengthen the already existing good relations between the Holy See and Guyana. President Granger in his remarks also hailed the longstanding relations between the Vatican and Guyana noting that relations between Guyana and the Holy See are founded on the principles of mutual non- interference in each other’s internal affairs, cooperation for mutual benefit, respect for treaties and international law and the maintenance of world peace and security. The Head of State observed that the Holy See, “has placed great attention to the urgency of mitigating the adverse effects of climate change and environmental degradation and encouraging efforts by global leaders in delivering Nationally Determined Contributions of the Paris Agreement”. He further stated that Guyana, in recognition of the global challenges to earth’s environment, is moving towards establishing a ‘Green State’. “Our ‘Green State’ will place emphasis on the protection of our environment, the preservation of our biodiversity, the promotion of the generation of energy from renewable sources and the adoption of practical measures to ensure climate adaptation”.

President Granger ended his remarks by saying that he e x p e c t e d t h e s h a r e d commitment between Guyana and the Holy See to confronting the challenges of climate change will contribute to the strengthening of our bilateral relations during the tenure of the newly accredited Papal envoy who was also assured of the full support of the Guyana government in the discharge of his duties. Guyana established formal diplomatic relations with the Holy See 22 years ago on June 9th 1997. The Papal Nuncio is appointed by and represents the Holy See, and is the head of the diplomatic mission, called an Apostolic Nunciature, which is based in Trinidad and is the equivalent of an embassy. In November 2017, Pope Francis appointed Nigerian Archbishop Fortunatus Nwachukwu as the new Apostolic Nuncio of the Antilles Bishop’s Conference (AEC). The Archbishop was ordained a priest on June 17th 1984. He possesses a Doctorate in Dogmatic Theology and a Doctorate in Canon Law. He served in the Apostolic Nunciatures – Holy See Embassies – in Ghana, Paraguay, Algeria, at the UN Offices and Specialised Institutions in Geneva, and at the Secretariat of State at the Vatican – Section of Relation with States. Archbishop Nwachukwu speaks English, Spanish, French, Italian, German, Arabic and Hebrew.

Article taken from the Catholic Standard