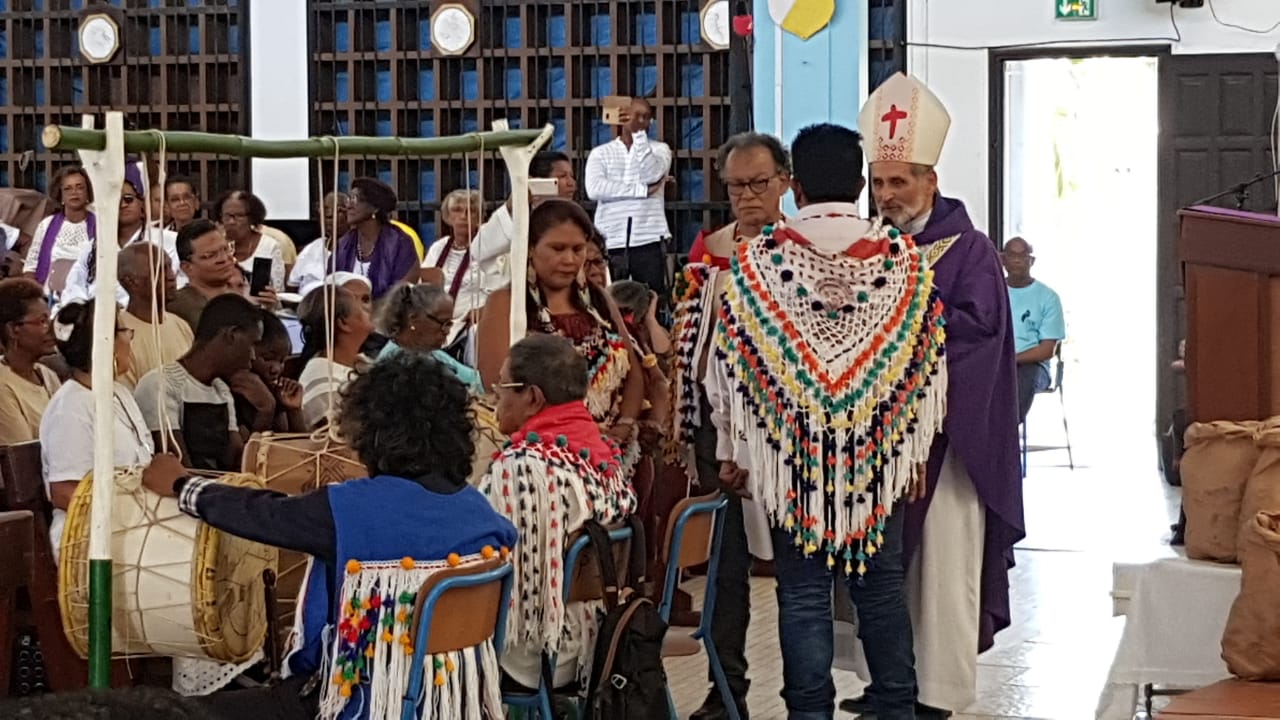 The Pope’s affection for the Amazon illuminates his post-synodal exhortation Dear Amazon, published on February 12, the anniversary of the martyrdom of Sister Dorothy Stang, a 74-year-old American nun. She had spent decades fighting landowners’ efforts to expropriate large areas of the Amazon. She was shot and killed on Saturday, February 12, 2005 in northern Brazil, with three bullets in the face near the town of Anapu, 1800 km north of Sao Paulo in the Amazon. The attack, early in the morning, occurred less than a week after the sister met with Human Rights Secretary Nilmario Miranda to inform him that four farmers had received death threats from Loggers and landlords. The previous year, the Loggers had accused Sister Stang of inciting violence and distributing arms and ammunition to indigenous people.

Francis’ exhortation was described as a “love letter”, the same love that animated Dorothy Stang and hundreds of bishops, priests, religious and lay people involved in the missionary life of the Church in the Amazon. This is not surprising:

mission is a matter of love. God’s love for humanity: “God so loved the world that he gave his only begotten Son, that whoever believes in him may not be lost but may obtain eternal life” (John 3:16); love of the missionary disciple for God and for Jesus : “Love of the missionary disciple for the people to whom he is sent: “Yes, God is witness to my deep affection for you all in the tenderness of Christ Jesus” (Philippians 1:8).

You will allow the last pastoral letter that I address to you as bishop to be both an echo of the synodal journey for the Amazon inaugurated by Pope Francis and an invitation to the Catholic Church in French Guiana – that is, all of us – to enter resolutely, with the Spirit of Christ, into this synodal journey of love and sharing. I will do this by drawing inspiration from the four dreams of Pope Francis:

Everything starts from God’s love! He loves this beautiful land, and he loves all mankind! “For you love everything that exists, you have no repulsion for any of your works; if you had hated anything, you would not have created it. How would it have survived if you had not wanted it? How would he have remained alive if you had not called him? “(Wisdom 11:24-25).

God’s and Jesus’ love for all sometimes leads to misunderstandings. The Pharisees thought Jesus did not love sinners and tax collectors because he approached them. Because the Church, together with Francis, approaches the Amerindians and African-Americans of the Amazon, some Catholics feel less loved. This is not the case. Jesus loves everyone, but he has a privileged love for those who need him more, precisely because they need him more, just as the sick need the doctor more (cf. Matthew 9:12). In fact, Jesus invited the Pharisees to go with him to meet the sick and sinners. Francis invites all Catholics to go, with him, to meet and listen to people from within.

A love that listens

Love finds its happiness in making the other happy. It listens to the feelings, desires and anxieties of the other. During our diocesan synod last February, we tried to live this mutual listening. We are all Amazonians, though in different ways. During this highly emotional synod, we were able to welcome the feelings and experiences of our Amerindian and Bushinengue brothers and sisters, but we also listened to those of the Creoles, the Hmong, the Brazilians and the Haitians… in short, to all those who make up our Guyana.

Listening, with the heart of God

Listening is essential to fraternal life. God always listens to his people: “Now the cry of the children of Israel has come to me, and I have seen the oppression of the Egyptians” (Exodus 3:9). We are invited to do the same: “Receive one another, therefore, as Christ has received you, for the glory of God” (Romans 15:7).

The Amerindians told us of their wish to live on their lands according to their customs, that France recognize the Charter of Indigenous Peoples, Convention 169 of the International Labour Organization (ILO) of the United Nations. They ask us to welcome their children and young people when they arrive on the coast for their studies. All the communities have expressed their desire to live in peace, security and fraternity. We have listened to each one express their wounds and dream their hope.

We listened to the cry of the Amazon rainforest, the rivers and the animals. They are a treasure for us and for the whole earth; their protection and preservation is an urgency if we are to offer future generations a habitable land.

Past history, colonization, the black slave trade and slavery, imprisonment and humiliation are burdened with pride and contempt, a will to power and deadly and criminal monopolization. The present history, the predation of the gold diggers, the will to exploit the land and its riches without restraint, to get richer and not to live together destroy a region of incalculable wealth. Everyone is wounded and disfigured. Both the victims and the perpetrators are not unscathed by the denial of fraternity and equity.

Today, the call of the Gospel resounds loudly: we are brothers and sisters. We are the children of one good and unique Father. He created everything with wisdom and by distributing to each person, to each people, different gifts of incredible variety and richness, so that each one may bring to others what he has and receive from others what he needs.

Jesus speaks to every culture

Jesus became incarnate in a culture. It was in the language of his people, based on the values of his culture that he brought his message of salvation and brotherhood. Following in his footsteps, Paul knew how to carry the same message in the culture and language of the different peoples to whom he was sent. At Antioch of Pisidia, together with the Jews, he made himself a Jew, speaking their language and in connection with their history and their Holy Books (cf. Acts 13:14-41). At Athens, on the contrary, he was able to speak to the Greeks in their language and in reference to their philosophy and religious traditions (cf. Acts 17:22-31).

The Spirit of Jesus lives in every culture

We are called today in French Guiana to better discover our different cultures. Certainly, the mission of Jesus’ disciples is to offer to all the friendship of Jesus and the salvation he brings. But they can only do this by imitating Jesus and his apostles: by recognizing the richness of cultures where the Holy Spirit is already present. The Holy Spirit, in fact, is already present in Amerindian wisdom, for example, in the way they share the goods of the earth without monopolizing them: they do not fence off the land to say: “Here, it is mine, do not pass through! “They manifest that the only master of the earth is God (cf. Leviticus 25:23). In hunting and fishing, they do not seek to harvest more than is necessary for their survival and that of their relatives, sharing the fruit of their harvest with all, without ever seeking to hoard it. Thus their culture, so little known, bears many signs of the presence of the Holy Spirit, who always invites us to fraternity. We are not owners but guardians of creation (cf. Genesis 2:15). We are a family, and we have to take care of one another. Selfishness is a sin (cf. Deuteronomy 24:17-22 for example).

In our Church, we want to continue the dialogue between peoples with different cultures. This will be a blessing for us, because recognizing us as brothers opens up the possibility of putting at the service of all the talents of each one to create a French Guiana of fraternity and solidarity. This work of the Church, already lived out, especially during our synod, is an essential contribution to the future of the whole of French Guyana.

The house is burning, literally and figuratively. Global warming is already impacting the life of the planet in a dramatic way. We see it in the intensification of fires, floods, hurricanes. We see it in the galloping immigration from peoples who cannot live on their own territory. This is not primarily political immigration; it is much more economic. We see it in the armed conflicts and in the struggles for water that will intensify in the course of the 2000s… The excessive exploitation to maintain the luxury and power of a few is an injustice and a crime. We are urged not to be complicit in this plunder and waste.

Jesus invites me to do my part

We all have a share of responsibility. Of course, regions, States, continents and the international community have a role to play. But they will only do so with the support of, and under pressure from, almost all of us. By learning not to waste, to be content with what I really need, to abandon a culture of waste to which I constantly and thoughtlessly throw away, in short by adopting a more sober lifestyle, more respectful of nature and of the riches of the soil and subsoil, I will be inclined to join the young people who have understood this urgency; with them, their enthusiasm and idealism, I will take part in the elections and I will choose as representatives and political leaders men and women who are sensitive to these questions and who are determined to promote another economy, at the service of men and with greater respect for creation.

The Pope’s fourth dream invites us to a “pastoral conversion” of our Church and of ourselves. For French Guiana, I want to put it into two forms.

a) To make our Church, our parish communities and our spirituality and prayer groups places of “synodal life”. Synod means “walking together. “Synodal life is a life in which we all walk together to make the Church live and to orient it towards the mission. It is a life that moves radically away from “clericalism” in which everything depends on the bishop, the priests, the deacons and their vision of things. It is a Church life that moves away from the fact that when a parish changes parish priests, everything changes suddenly by the sole will of the parish priest.

In the early years of Christianity, the Church strongly lived synodality. A problem arose between the Christian communities of different cultures in Jerusalem? the Apostles called the whole assembly together to find the solution: cf. Acts 6:1-6. Was the question of welcoming the Gentiles into the Church a problem? The apostles again called the whole assembly together so that, after discussion and prayer, they could proclaim together “the Holy Spirit and we ourselves have decided…”. (Acts 15:6-29).

(b) Living in closer proximity to indigenous peoples

Our Catholic Church is still too absent from most Amerindian villages, whether they are on the coast or along the rivers. We don’t give them back enough, we know so little about their languages, their cultures, their spirituality. How can we be surprised that the evangelical missionaries are so present there? We need to change the style of the Church. It is not for them to come to us, but for us to go to them, to learn from them, to discover the richness of their culture and its wisdom, and then to offer them the friendship of Christ. In this way we follow the very example of Jesus who came to pitch his tent among us in order to lead us to the Father (cf. John 1:14). This is the very principle of an incarnate, Samaritan, fraternal, loving Church, living like Jesus.

May Our Lady, Mother of the Amazon, accompany us on this journey and make the flowers of holiness bear fruit.