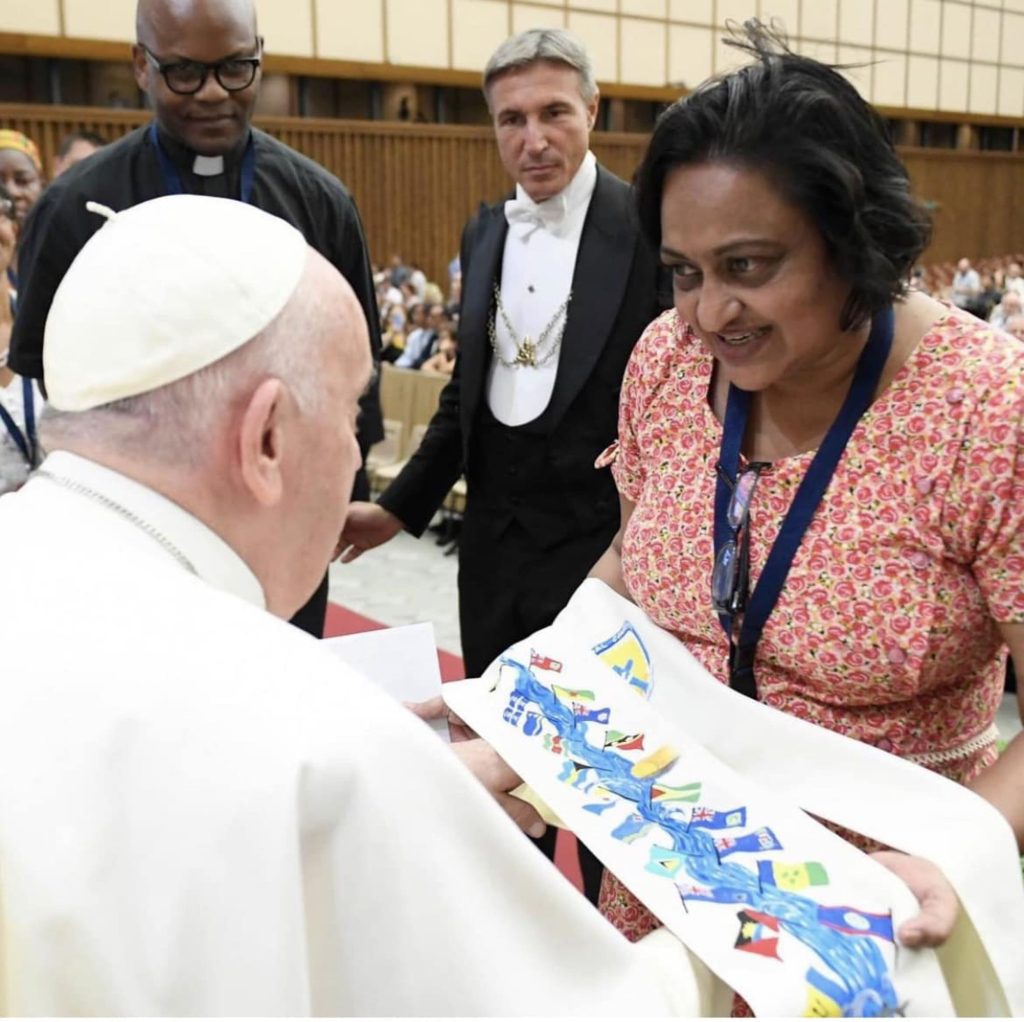 A hand-painted priest’s stole featuring the flags of all the nations comprising the Antilles Episcopal Conference (AEC) was presented to Pope Francis during an audience with the Holy Father to conclude the 3rd International Catechetical Congress, held September 8–10 at the Vatican, Rome.

Bernadette Gopaul-Ramkhalawan, a Penal parishioner and catechist for many years, told Catholic News via WhatsApp that Pope Francis was familiar with the region “when I said it was a gift from the Antilles. He loved it too! He said, ‘For me?’ I said ‘yes’ and he showed his appreciation. He received it happily, blessing the AEC.”

The stole was designed and painted at Liturgy School 2022 by Bliss Vidalis-Lewis, a young artist and catechist from the parish of Penal, under the guidance of well-known Liturgy School Art workshop facilitator Debbie Tam.

The delegation comprised the catechetical consultors to the AEC’s Commission on Doctrine and Faith (Catechesis, Doctrine and Education) chaired by Bishop John Persaud of Mandeville. The international congress gathered more than 1,000 bishops, clergy, religious and lay catechists under the theme, The Catechist, witness of the new life in Christ. The event was organised by the Dicastery for Evangelization, a department of the Roman Curia. It was created on June 5, 2022, through the merger of the Pontifical Council for Promoting the New Evangelization, and the Congregation for the Evangelization of Peoples.

Greeting participants at the private audience at the Paul VI hall, Pope Francis expressed his joy in meeting with them and paid tribute to their international diversity.

A Vatican News report said the Pope stressed the very important role catechists play in the Church, calling them “a sign of the Church’s responsibility to so many people: children, young people and adults who wish to make a journey of faith”.

Pope Francis pointed out that he greeted everyone at this audience as catechists, including the bishops, priests, and consecrated members among them, as all are catechists. “The Lord calls us all to make His Gospel resound in the heart of every person.”

The Pope encouraged catechists to never get tired of their ministry, to avoid a ‘school lecture’ type catechesis, and to strive to offer a “living experience of the faith that each of us wishes to pass on to the new generations.”

At this time, offering catechesis is challenging work, he admitted, since it involves finding the best ways to communicate the faith to different age groups and walks of life. The key, he noted, is the interpersonal encounter that “opens the heart” to hear the Gospel and accept the invitation to live and grow in Christian life.

The Pope underscored the purpose of catechesis, describing it as a “privileged stage of evangelisation” where one encounters Jesus Christ and allows Him to grow in our lives. The congress theme focused on the third part of the Catechism of the Catholic Church, the Pope recalled. He reminded the catechists that they are “called to make visible and tangible the person of Jesus Christ, who loves each one of you”, guiding our lives and helping us discern our moral actions.

“Never turn away from this source of love, for it is the condition for being happy and full of joy always and in spite of everything. This is the new life that sprang up in us on the day of Baptism and that we have the responsibility to share with everyone so that it can grow in each person and bear fruit.”

The Pope spoke briefly off-the-cuff about catechists who were instrumental in his own life and faith journey. In particular, he paid tribute to an elderly Sr Dolores, who taught him when he was young, and whom he remembers fondly for her dedication and care, helping him in his faith life.

He encouraged the catechists to never overlook the good work and impression they can have in their own ministry on others, as Sr Dolores did with him.

Pope Francis offered the catechists his blessing, entrusting them to the intercession of the Blessed Virgin Mary and all the catechist martyrs.