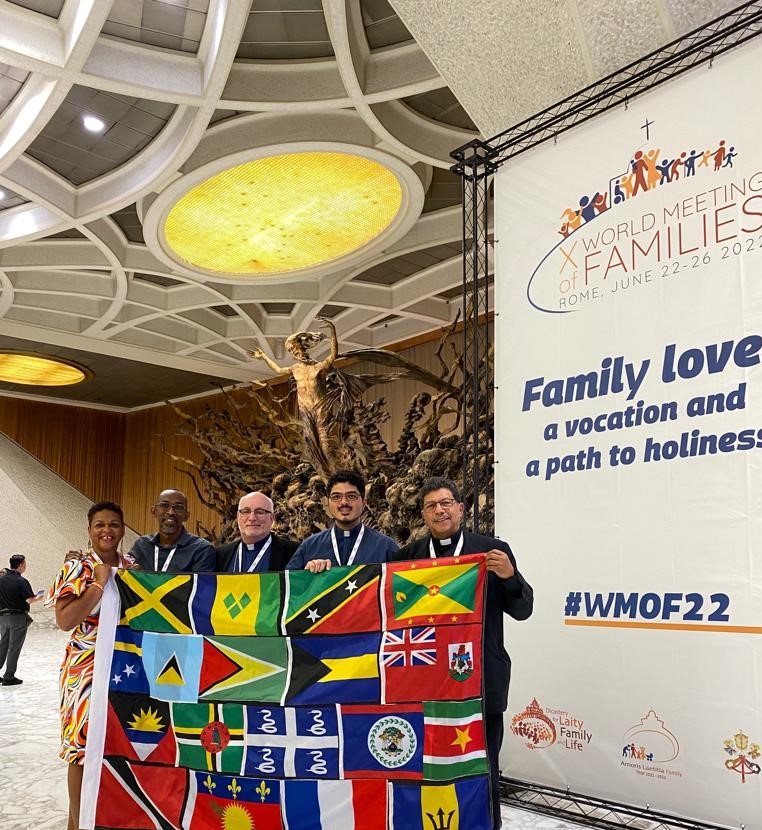 The 10th World Meeting of Families (WMOF) concludes in Rome, Italy this Sunday at St Peter’s Square with Pope Francis expected to issue a mandate to Catholic families during the Angelus.

The WMOF22 began Wednesday June 22 under the theme Family Love: A Vocation and a Path to Holiness. About 2,000 official delegates from 120 nations were expected to attend the meeting, representing bishops’ conferences and international Catholic movements and organisations. This was the third time the Italian capital hosted the event.

The Antilles Episcopal Conference (AEC) was being officially represented by Bishop Robert Llanos of St John’s-Basseterre, Antigua; Fr Matthew Ragbir, and Tricia and Raymond Syms (Trinidad and Tobago), consultors of the AEC’s Commission on the Laity and Family Life (Domestic Church).

The group arrived on the evening of Sunday, June 19 from London’s Gatwick Airport and stayed at the BorgoNove Guest House, a two-minute walk away from St Peter’s Square. AEC Vice President Archbishop Jason Gordon was also in Rome for meetings and the WMOF.

The WMOF is a triennial event and was originally scheduled for Rome in 2021 but the Covid-19 pandemic caused a one-year postponement. It also prompted a look at new ways to involve Catholic families from around the world and to ensure that they take the lead for the congress.

WMOF22 was therefore set up with dioceses encouraged to host events in country, and the international gathering of delegates in Rome for the Festival of Families (Wednesday, June 22) and the Theological Pastoral Congress (Wednesday, June 22 to Saturday, June 25). Venue for the festival and congress was the Paul VI Audience Hall.

The congress was livestreamed and translated into English, Spanish, French, Portuguese, and Italian as well as Italian sign language and English sign language. Topics ranged from promoting collaboration between priests and married couples to accompanying couples in their first year of marriage. Difficult topics such as forgiveness and healing after a betrayal or helping families dealing with addiction was discussed.

There were more than 30 presentations during the congress with more than 95 per cent done by married couples and single persons involved in outreach to families through their parish, diocese, bishops’ conference, or movement.

Pope Francis was expected to preside at the closing Mass on Saturday, June 25 at St Peter’s Square.

By Raymond Syms, Editor, writing from Rome, Italy on Monday