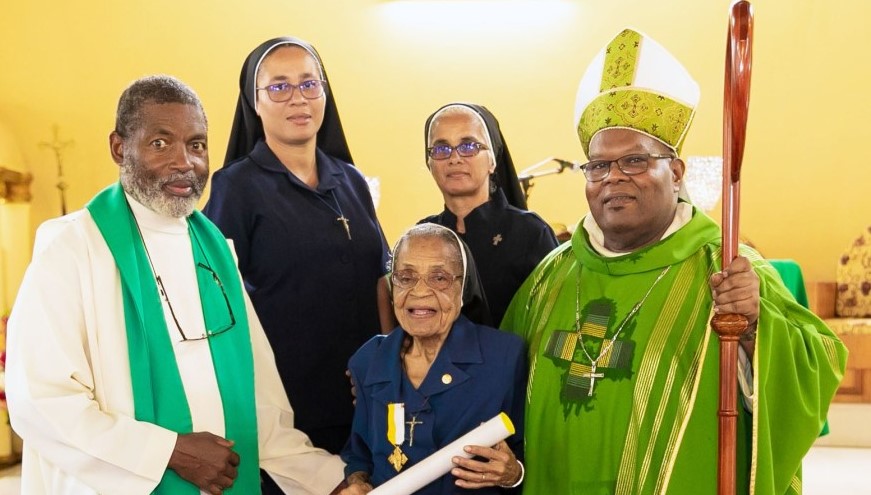 On Sunday, September 13, 2020 the St. John’s RC Church, Mesopotamia came alive in joyful celebration with Sr. Augustine Quarless who received a Benemerenti Medal.  The Benemerenti Medal is amedalawarded by the Pope to members of the clergy and laity for service to the Catholic Church. Originally established as an award for soldiers in the Papal Army, it is now a civil decoration but may still be awarded to members of the Pontifical Swiss Guards. Bishop of the Diocese of Kingstown, Gerard County, C.S.Sp presented the medal to Sr. Augustine while Msgr. Michael Stewart, parish priest of St. John’s Parish, helped to pin it on her.

On August 27, 2019 Sr. Augustine celebrated 65 years of profession; and on November 4 that same year she celebrated her 92nd birthday.

Although Sr. Augustine is Trinidadian by birth, of her 65 years of religious life, she spent 31 years in Africa and over 27 years in St. Vincent and the Grenadines where she presently resides.

From 1954 to 1985 Sister’s missionary journeys led her far away from her homeland, first to Sierra Leone (West Africa), then in 1970 to The Gambia (West Africa).  She celebrated her silver jubilee there on August 28, 1979.

In January 1993 she was assigned to Pastoral Ministry in Mesopotamia. She often reminisces about “her fights” with Fr. Mike Stewart, with whom she is now ‘good buddies!’  In September 2003 Sister took up assignment in Kingstown where she worked at the Cathedral Parish office as a support to the Cathedral Administrator. In 2006 she was reassigned to the Mesopotamia Community as Community Leader. There she spent seven years before returning to Kingstown.

Sister served in various capacities throughout her ministrations to the Diocese of Kingstown.  She was a member of the National Service Team, the marriage Tribunal Preliminary Investigation Team, Counselor, and in Communications, she was ‘the anchor’ for the weekly radio programme “Catholic Forum”.  Hers was a well-known voice across the island even among members of different faiths. She was also involved in SIGNIS Caribbean as the ‘Communications voice’ for the Diocese of St. Vincent and the Grenadines.

Sr. Augustine celebrated her golden jubliee of religious profession on August 28, 2004 in Trinidad & Tobago. Despite the many health challenges that afflicted her, she remained positive and kept going. Be that as it may, Sr. Augustine lives in the gladness of each day and continuously praises and thanks God for His goodness to her.

Sister’s 65 years of religious life have been full and adventurous.  Having been led by God she adopted and adapted to new cultures and served peoples of all races, nationalities, and classes.  Like Samuel of the Old Testament, Sister Augustine Quarless heard the call, answered the call, and responded with great faith.

Congratulations Sister and we pray God’s continued and richest blessings on your life!